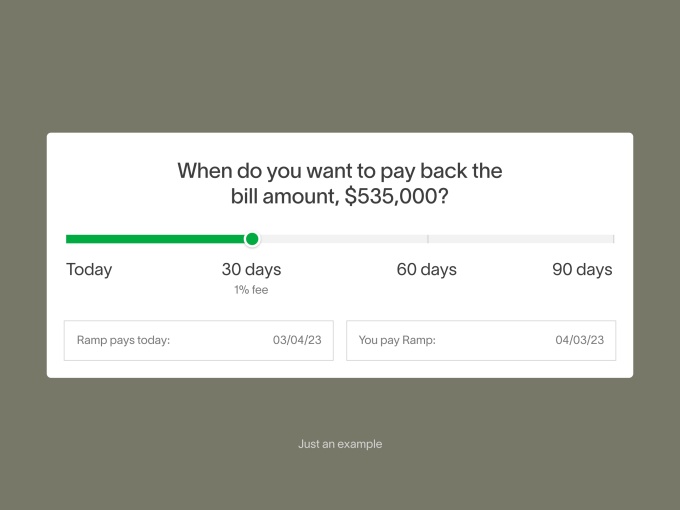 In the startup world, adding lines of business is always a risk. A company can spread itself too thin and end up not doing a great job at much of anything. Or it can stumble upon an offering that not only is a hit, but a hit that’s growing faster than its original, core product.

The latter appears to be true in Ramp’s case.

The corporate spend startup launched its bill pay feature in October of 2021, building upon its corporate card business and accounting software product.

Within half a year of going to market, according to co-founder and CEO Eric Glyman, Ramp went from launch to more than $1 billion in annualized bill pay volume.

“The pace of growth has outpaced our corporate card business,” Glyman told TechCrunch in an interview. “It took us significantly longer as a company to go from launch to $1 billion in annualized volume in the card business. The speed and rate of adoption and how quickly businesses are using the bill pay product is much faster.”

At first, bill pay was something that existing customers could discover and use in self-service. But as more people continued to use it, including vendors who were getting paid with the feature, its popularity grew.

“Now people are coming in just for the bill pay product as well,” Glyman said.

The appeal, in his view, can be attributed in large part to the ability to integrate with Ramp’s other offerings.

“When using a standalone solution like Bill.com, a user has to connect that product to accounting software, and then connect their credit card to the reimbursement software so you could continue to operate your accounting software on it,” Glyman told TechCrunch. “Versus with Ramp, being able to manage it all in one platform with automated accounting, expense management and invoice processing.”

With the early success of the bill pay feature, Ramp is now adding financing and overlay with a new product called Flex.

In the beginning, if a customer used Ramp to pay a vendor, they had approximately 30 days to pay it back.

But with the new Flex feature, customers will have the option “in one click” to add financing to pay the money back up to 30, 60 or 90 days later for a fee while the vendor “gets paid right away.” Besides the extra time, bill pay gives the business the flexibility to pay any way they wish or the vendor requires, including via ACH, check or card. 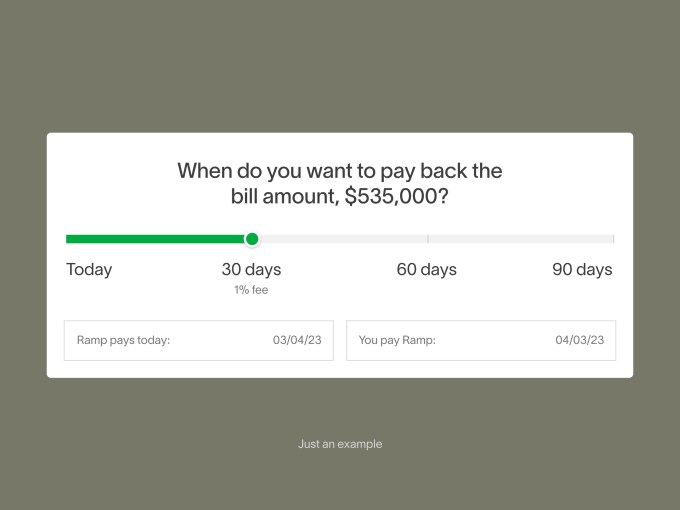 “A lot of the businesses we support have a lot of working capital that gets tied up [when paying bills,]” Glyman said. “Now they can extend financing through other forms of payment, and finance any invoice through us.”

The longer the terms of the financing, the larger the fee paid by the business. Ramp makes money through the bill pay offering via those fees as well as interchange fees when bills are paid. If the business pays back the money within 30 days and did not use their card, Ramp won’t actually make any money off it using the bill pay feature. But the thinking/hope behind it is that the software will lead to stickier customers.

Flex is now available to select customers as a part of Ramp’s early access program. The company is “actively working toward a general access” over the next few months, although not in all U.S. states.

The Flex feature appears to be an attempt by Ramp to stand out in an increasingly crowded corporate spend space. Brex too has a bill pay feature that also allows its customers to forward their bills and invoices to the startup to pay them, or have their vendors send them directly. Like Ramp, its customers can make payments to vendors through ACH, wire or check. It doesn’t charge any payment transaction fees but it does not indicate on its website that it offers any flexible financing for those payments through its bill pay feature via ACH. Airbase and Rho too offer a bill pay feature, but there is also no indication on their websites that they offer any financing through their bill pay features via ACH.

Generally, Glyman anticipates that non-tech businesses — particularly in industries such as e-commerce, construction and manufacturing —  that have long cash conversion cycles and rely on working capital offerings beyond corporate cards will find the option to flexibly pay bills “particularly helpful.”

“We can now not only see that our customers’ bills are coming up, but also help them determine how and when to pay them,” Glyman said.

When it comes to overall revenue growth for the company, the bill pay feature is becoming “very significant” in terms of overall payments volume, he added.

“We’re powering well into billions of volume on the card,” Glyman said.

The move significantly opens up the total addressable market (TAM) for Ramp, which points out that there are currently $120 trillion in global B2B payments processed annually, of which only $1.5 trillion are on cards.

“We’re considering other ways of expansion in an effort to make the product itself more valuable and to drive adoption around core products,” he added.

But in today’s environment, isn’t Ramp worried about the risk of default?

Glyman claims the company is “not taking incremental or net new risk” with the new Flex feature. For example, if a business has a $100,000 limit, they might put $20,000 or $30,000 on their card and apply that limit to flex some bill payments.

In general, he said, Ramp “invested in its earliest days in really sophisticated credit risk and underwriting capabilities.”

“We outperform our peer set even on our existing product,” Glyman told TechCrunch. “Flex leverages the same underwriting we use today for that core product.”

While Glyman would not divulge the company’s specific default rate, he said it has been “very pleased with it.”

“Based on our understanding of the market, we do believe we have industry-leading performance in terms of our credit,” he said.

Of course, Ramp is not the only fintech startup broadening its offerings in an effort to be more competitive and one-stop shops for its customers. In the past few months, Brex declared it was making “a big push” into financial software with a focus on enterprise clients, Airbase announced it was amping up its corporate card offering and Rho said it is adding expense management to its offerings.

Earlier this year, Ramp announced it was also expanding into the travel business. In March, it raised $200 million in equity at an $8.1 billion valuation.

Fintech Roundup: The gloves are off in the spend management space