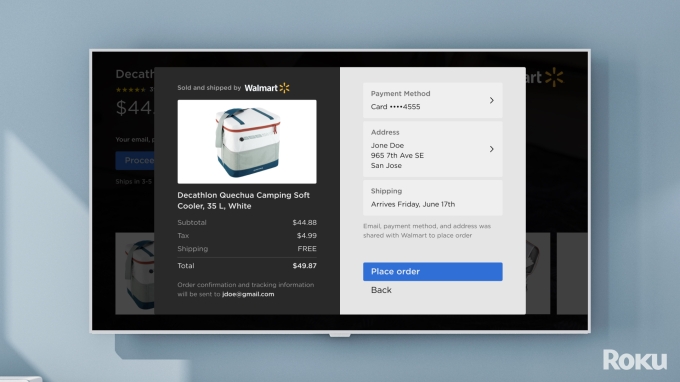 Roku and Walmart announced a new partnership that aims to crack the code on making purchases via TV streaming and shopping with remotes. On Thursday, the two companies introduce their plan to allow viewers to purchase items with their remotes while streaming on Roku devices. The deal is expected to unite Roku’s streaming platform’s 61.3 million subscribers with a retailer that had total revenue of $141.6 billion in the first quarter of 2022.

Essentially, the program adds an overlay to an existing ad so that streamers can choose to click “OK” on their Roku remote and make a transaction right on the screen with their TV show paused. A shopper won’t be taken to Walmart.com or need to capture QR codes on their phones to complete orders.

Typing a credit card number using a TV remote can be frustrating so Roku and Walmart have made it so customers won’t have to enter their credit card numbers since Roku’s payment platform has the customers’ payment details pre-populated.

The partnership “evolves shopping beyond the QR code and will change the way customers interact and shop TV and video content,” Roku and Walmart wrote.

To start, the shoppable ads will appear on The Roku Channel video-on-demand content and will roll out over time to other channels on the platform, Roku informed TechCrunch. 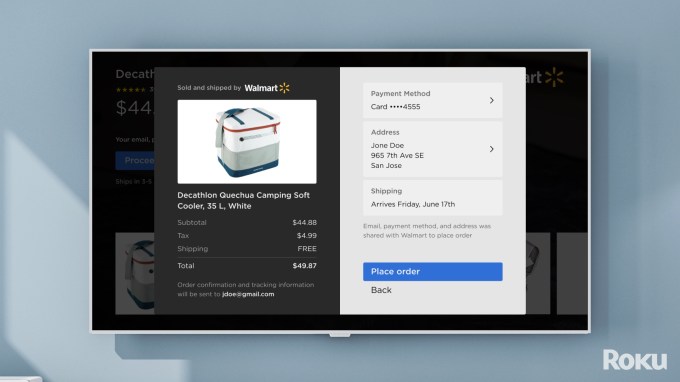 “We’re working to connect with customers where they are already spending time, shortening the distance from discovery and inspiration to purchase,” said William White, chief marketing officer, Walmart, in a statement. “No one has cracked the code around video shoppability. “By working with Roku, we’re the first to market retailer to bring customers a new shoppable experience and seamless checkout on the largest screen in their homes – their TV.”

“We’re making shopping on TV as easy as it is on social,” added Peter Hamilton, Head of TV Commerce, Roku. “For years, streamers have purchased new Roku devices and signed up for millions of subscriptions with their Roku remote. Streaming commerce brings that same ease and convenience to marketers and shoppers.”

Since this announcement, Roku stock jumped over 4% in after-hours trading on Thursday. This is a small win for the company as we reported back in April that Roku stock declined following its first-quarter results, dropping 20% in March and more than 70% in a year. We will have to wait and see if this new partnership with Walmart will satisfy investors and drive higher engagement for the platform.

Video shopping is far from new, and shoppable TV has moved beyond QVC (the TV shopping channel) and 1-800 ads. For instance, Amazon launched Amazon Live in 2019 — a strong indicator that live video had become the new focus for e-commerce. Then, Instagram took the plunge in 2020, introducing Live Shopping. Facebook followed with Facebook Shops. Walmart, Google, TikTok, and Shopify all joined the party as well.

Walmart has been fairly experimental when it comes to new ways to transact. It was the first retailer to test out both TikTok’s and Twitter’s live e-commerce platforms and has invested in live shopping by hosting events across Facebook, Instagram, YouTube, TalkShopLive, and others.

The live shopping space continues to heat up as, yesterday, eBay announced the launch of eBay Live, a live and interactive environment for shoppers.

Live commerce has been the major trend for years now since users can easily navigate online checkout using a mobile phone or desktop. But T-commerce — or shopping content as it’s seen on TV — has never really taken off. YouTube most recently has tried to enter this space by making its YouTube app a second-screen companion for TV viewers that will allow them to shop as they watch. It remains to be seen whether it will take over or if Roku and Walmart can move the needle on people purchasing products on their television screens.