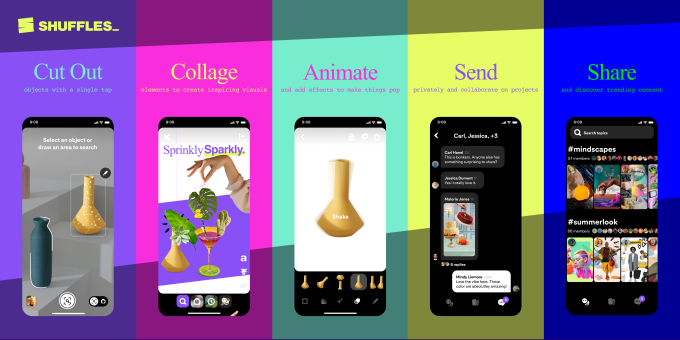 Collage-style video “mood boards” are going viral on TikTok — and so is the app making them possible. Pinterest’s recently soft-launched collage maker Shuffles has been climbing up the App Store’s Top Charts thanks to demand from Gen Z users who are leveraging the new creative expression tool to make, publish and share visual content. These “aesthetic” collages are then set to music and posted to TikTok or shared privately with friends or with the broader Shuffles community.

Despite being in invite-only status, Shuffles has already spent some time as the No. 1 Lifestyle app on the U.S. App Store.

During the week of August 15-22, 2022, Shuffles ranked No. 5 in the Top Lifestyle Apps by downloads on iPhone in the U.S., according to metrics provided by app intelligence firm data.ai — an increase of 72 places in the rankings compared to the week prior. It was the No. 1 Lifestyle app on iPhone by Sunday, August 21st, and broke into the Top 20 non-gaming apps on iOS as a whole in the U.S. that same day, after jumping up 22 ranks from the day prior.

Additionally, the firm Sensor Tower found the app is now No. 66 Overall on the U.S. iPhone App Store and is the No. 1 Overall app in Ireland, New Zealand, and the U.K. It’s No. 2 Overall in Australia and No. 3 in Canada.

First launched in late July 2022, the app has seen 211,000 iOS downloads worldwide in the month it’s been live. 160,000 of those downloads were in the U.S., data.ai says. Sensor Tower, meanwhile, estimates the app has seen approximately 338,000 installs during this time.

Considering it’s still not “publicly launched,” Shuffles appears to be an out-the-gate hit for Pinterest, which has been trying to reinvent itself for the creator-driven, video-first era with products like Idea Pins, similar to TikTok, and live video shopping on Pinterest TV.

The new app allows users to build their own collages using Pinterest’s photo library or by snapping photos of objects they want to include using the camera. One clever feature involves its use of technology, built in-house, that allows users to cut out objects from their photos, their Pinterest boards, or by searching for new Pins.

Pinterest debuts a new app, Shuffles, for collage-making and moodboards

This is similar to iOS 16’s forthcoming image cutout feature that is, arguably, one of the more fun additions to ship with Apple’s new mobile operating system. Here, you can effortlessly copy an object from one of your photos — like your dog, for instance — then paste that cutout anywhere you choose, like in an iMessage chat. This feels a bit magical, as you only need to touch and hold to lift the image away from the background.

Shuffles, meanwhile, makes image cutouts even easier. When you either search for or snap a photo, the app often automatically identifies the object in the photos and you only have to tap the “Add” button to place it into your collage where it can be resized and moved around the screen. At other times, you can use the included tool to cut out the portion of the image you want to utilize in your creation.

You can also choose to add effects and motion to the images to make them shake, spin, pulse, swivel and more. For instance, you could add an image of a record player, then animate it so it actually spins. 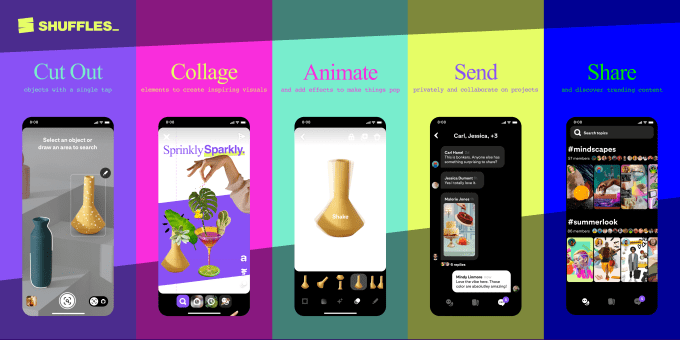 The final product can be saved locally to your device, shared in a message with friends, or published to a dedicated community using a hashtag. These hashtags are browsable in the app’s discovery section where collages tagged with popular hashtags — like #moodboard, #vintage or #aesthetic, for instance — are also showcased.

While the app does make for good TikToks, it helps drive traffic to Pinterest too. The objects in users’ collages are linked to Pinterest and a tap will bring you to a dedicated page for the item in question, which you can then open to view directly in Pinterest. In the case of items that are available for purchase — like fall fashion or home decor, for instance — users could also buy the item by clicking through to the retailer’s website.

Demand for the app has been aided by its exclusivity, for the time being.

Users need an invite code to get in — and they can only get it from an existing Shuffles user who has just 5 invites to share.

Invite codes have often been used to drive demand for new products, after seeing outsized success as a growth mechanism for Google’s new email system Gmail in the early 2000’s. But in later years, their usage has felt less authentic, as they became a way for app marketers to push users to post to social media in exchange for early access to a new product.

With Pinterest, however, the use of the invite code mechanism is not tied to a request that users must take some sort of action to be let in. Instead, you have to know someone to get an invite, which has led some TikTokers to lament how they’ve had to beg friends for codes.

(Beg no more: Pinterest provided TechCrunch readers with an invite code to use for Shuffles: FTSNFUFC. If that runs out, you can visit Pinterest’s Instagram or Twitter account for future code drops. This is not an advertisement or paid promotion, we’re just sharing the code!)

Pinterest told TechCrunch the app is invite-only because, technically, it hasn’t publicly launched.

Shuffles, we’re told, is the first-ever standalone app created by Pinterest’s in-house incubator, TwoTwenty. The team, which also had a hand in the creation of Pinterest TV, is focused on researching and testing new product ideas and iterating on those that gain traction.

As to why the app is resonating with Gen Z, it seems to be the combination of the technology used to simplify collage making with the desire for creative expression tools that serve the demographic’s social habits.

“The app is seeing budding download momentum, targeting younger users. It’s building off the empowerment of creativity and user-generated content, popularized in many ways by TikTok,” Lexi Sydow, Head of Insights at data.ai, told TechCrunch. “Especially for younger generations, photo editing and creative projects are mobile-first more than ever, leveraging robust mobile apps to create robust projects that once required sophisticated desktop software. The app takes collaging one step further with simple embedded tools that would require multiple steps or coordination across multiple apps,” she explained.

“Users curate their mood boards and ‘vibes’, which touches on a similar cultural thread to visual-first campaigns by Spotify showing your unique music tastes. The app inherently relies on Gen Z’s social habits where users leverage social media apps to share with their networks and close circles of friends. The app has received 4.31 out of 5 stars to date since launch, with 72% of all reviews being 5 stars,” Sydow added.

Shuffles is currently iOS-only and a free download on the App Store.