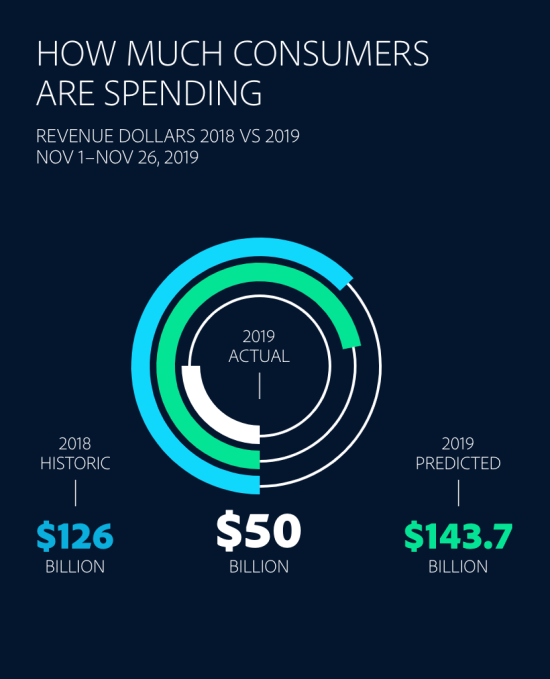 Facing a shorter holiday shopping season this year, U.S. retailers started rolling out their Black Friday deals earlier than usual. That move has paid off, according to new e-commerce data shared by Adobe Analytics this morning, which found that U.S. consumers have already spent $50.1 billion online between November 1 and November 26, 2019 — which represents a comparable increase of 15.8 percent year-over-year.

This year, Thanksgiving arrived on November 28, a full week later than it did in 2018 when it came on November 22. That left retailers with 6 fewer days to drive post-Thanksgiving Day sales — a situation it hadn’t been in since 2013, when the shorter time frame led to serious delivery struggles. To salvage the lost shopping days (and to not again find themselves in a similar situation as 2013), retailers simply rolled out their deals a week early. 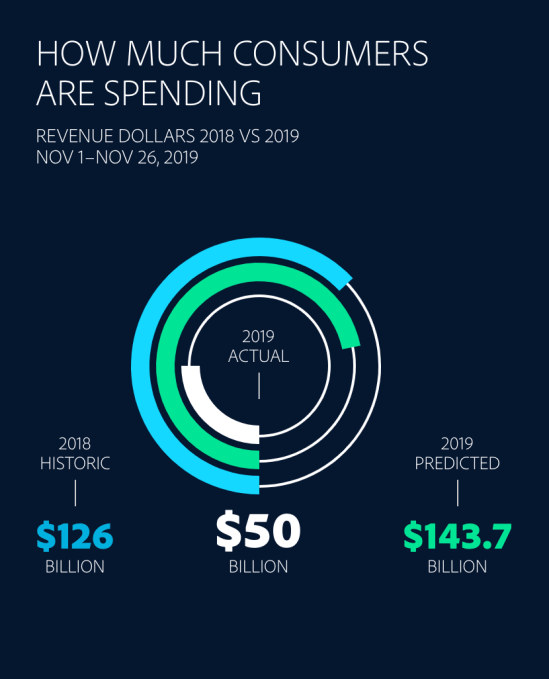 For example, Amazon kicked off a Black Friday deals week on November 22. Walmart introduced early savings through “Buy Now” deals on Walmart.com, in addition to a pre-Black Friday event that started on Nov. 22. Target integrated Shipt’s same-day shopping service into its app and ran a preview sale, weekend deals, and today, Nov. 27, an early access sale. Other retailers followed suit, as well.

But consumers weren’t even waiting for these Black Friday preview deals to start shopping. According to Adobe Analytics, which tracks online transactions for 80 of the top 100 U.S. retailers, all 26 days in November so far have surpassed $1 billion in online sales. Seven days even passed $2 billion in sales, which made 2019 the first year to see multiple $2 billion days this early in the shopping season.

And as of this morning, $240 million has already been spent online, representing 19.3% growth year-over-year, and putting the day on track to hit $2.9 billion. 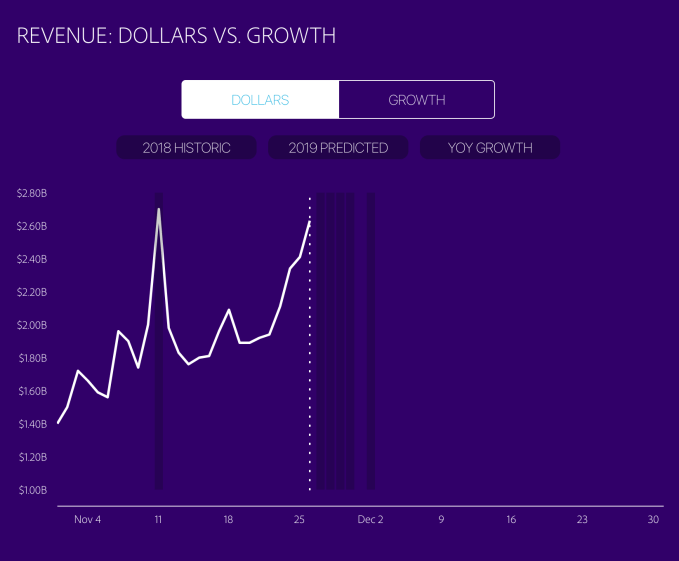 Based on this data, Adobe believes its earlier forecast of $143.7 billion spent during the full holiday shopping season (Nov.-Dec.) remains accurate. That estimate represents a 14.1% rise from a year ago, according to Adobe. In addition, the three biggest shopping days — Thanksgiving, Black Friday, and Cyber Monday — will also see increases, it says.

The firm also sees a surge in mobile shopping this year, with 34.3% of all e-commerce sales being made via a smartphone, up 24.2% year-over-year. App Annie’s mobile shopping forecast had also predicted a record number of mobile shoppers, with a 25% year-over-year increase in time spent mobile shopping during the weeks of Black Friday and Cyber Monday. The firm said shoppers will spend 2.2 billion hours globally (outside China) across shopping apps this holiday season.

Other notable trends include a rise in “buy online, pickup in-store” shopping — 61% will take advantage of this, leading to 27% more in sales over last year. Plus email promotions this season have led to 16.5% of all online revenue, up 10% year-over-year. Paid search accounted for 23.7% of sales, while social media led to just 2.8%.

“With the shorter shopping season and retailers starting their promotions earlier, Adobe is seeing holiday discounts already well underway even before Thanksgiving Day,” said Jason Woosley, Vice President of Commerce Product & Platform at Adobe. “For televisions alone, shoppers are already seeing discounts twice as deep as expected with average savings yesterday of 17.5%. Those consumers who grab their smartphone to do some quick online shopping after dinner are likely to find offers that are even better than this time last year,” he added.